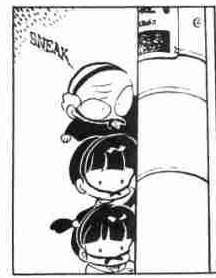 The sneaking masks worn by some characters in manga (Happosai often in Ranma, Tenchi's dad in Tenchi Muyo) are Tenugui - hand towels. That the face is still recognizable doesn't matter, they are more symbolic than actual disguises similar to Robin's mask in the teen titans/batman. The theory I heard about how these came about is: During the Heian period a common practice was for guys to sneak into unmarried women's rooms at night and be gone before dawn. The men would wear these sneak masks so that when the girl was asked if she knew the man she could honestly say he was wearing a mask. Supposedly, in the Heian period, if the guy came back three nights in a row she would became betrothed to him and leave her fathers house as a bride.

There is a second theory about how this practice came about as well. A legendary thief around the years 1823-1832 called Nezumi Kozo (Mouse Guy) wore one. He was a Robin Hood type. He would steal from big houses owned by very rich guys doing illegal things and then after making his getaway he would go onto the roof of a house and throw the money to the poor town people who were suffering from such heavy taxes they couldn't afford food to feed their babies. Well the guy did exist and was captured in 1832 many of the stories behind him are probably made up/over blown. He is currently buried in Sumida-ward. Because he was such a lucky guy (took years for the cops to catch him) people would take scrapings from his grave stone for luck. The stone was originally square and is now almost a circle. They put up a fake grave stone for people to take scrapings from.

Tenugui - a rectangular hand dyed cotton cloth about 33X90cm, most commonly used as a towel or head covering. Because Japan is a humid country the tenugui ends are unfinished to dry quicker and will fray after a few washes. If it frays do not pull the strings cut them. This was the most common household item in Japan until a few decades ago when the terry cloth towels (called Seiyo Tengui - western hand wipe) became popular. It has many other uses as well it was/is used as a wiping tool such as a towel or a handkerchief, it was also used as a bandage or a headwear in the old days. Kabuki actors used to print their names onto them and give them out at debut shows. Although everyday use of tenugui dropped significantly, Tenugui remains necessary part of matsuri (festival) costume.

This website shows how it is folded into a hat for Kendo: http://www.yamatanidojo.com/folding_the_tenugui.htm.
This website sells them, explains some of their uses, and tells the history of them: http://www.wuhaonyc.com/blog/
Authored by antimatterenergy

What's up, its nice piece of writing on the topic of media print, we all know media is a great source of information.

1. No idea as to what Ranma ½ is click here (though knowledge of Ranma ½ is not needed for the majority of posts).
2. I post infrequently because I'm lazy.
3. I tend to alter preexisting posts.
4. I occasionally combine posts on the same subject.
5. I take no responsibility for comments left on my blog, though I reserve the right to delete them.

antimatterenergy
I'm a large fan of the Ranma 1/2 manga, read a lot, like watching films, would like to write some myself but find writing a story to be difficult.